Posted on September 23, 2013 by woodworksbyjohn 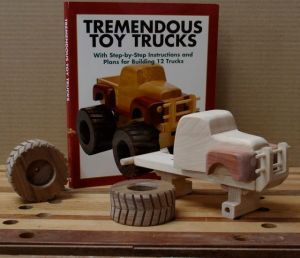 This is getting exciting!  Connor’s truck is actually starting to look like a monster truck and resemble what the cover picture looks like.  Of course, it has a few changes to personalize it.  Here you see it posed in front of the book and so far things look pretty much the same. 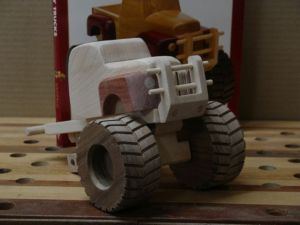 I really like how it has the huge “cow catcher” type of bumper/push bar on the front.  It’s secured with a couple of dowels into the frame piece.  Now that they’re sanded they have an oval appearance. 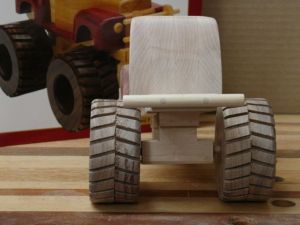 At the rear of the truck, the plans called for simply gluing a dowel above the frame which seemed to block the tailgate.  Not that it is hinged or anything but to me it just didn’t look right.  I mimicked the dowel into the frame method so it looks like this. 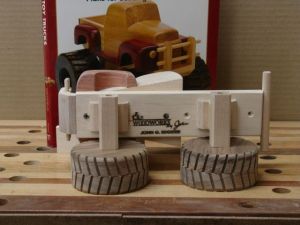 Underneath the frame the plans also called for making a transfer case in the center and then running a couple of dowels that resemble the driveshafts.  Although I really like the looks of that there’s hardly any strength there and I’m guessing it would be the first thing to break so decided to leave that detail out.  I want Connor to be able to play with this thing!  Notice the tire tread,they are directional and incorrect in this shot — yeah, I had to sign it.

The final construction step was trying to figure out how to carve the tailgate.  Also whether or not I was capable of doing it justice.  I’d rather leave it blank then attempt to do it and have it look bad.

I tried a number of different ways to go about it.  The initial thought was to carve it, paint the entire tailgate black, and then scrap/sand the paint off to only leave it inside of the carving.  First attempt didn’t work, then tried to protect the area with glue (rubber cement) but the paint still bled through the wood and it just didn’t suit me.  Also tried a couple of different chisels to see how to control them in such a small space.  Finally settled on using a #11 sweep in a 2 mm size.  The area to carve is about 2 1/2″, the name is 6 letters so things were  evenly spaced out.

The piece of wood is longer than needed, the lines drawn all the way across the width indicate the required length. 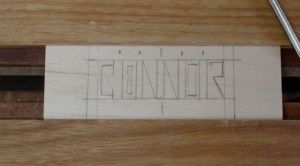 My first attempts were using a stencil that had 1/2″ letters but it just didn’t space out correctly.  After dividing the space into 6 equal segments I drew a line to indicate the top and bottom of the letters.  Next up was to sketch them in and use the width of the chisel as the width of the letters — makes sense doesn’t it?  The first step was making all of the vertical cuts, starting about 1/3 of the way up  and stopping at the top of each letter. 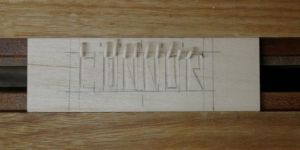 Then the piece was flipped over so the rest of the vertical line could be chiseled to the bottom of each letter.  Lastly, the horizontal and angled lines were cut in to complete each letter.

You can see I had a “chisel slip” on the N’s so decided that was now the signature logo for the back of Connor’s truck.  After cutting the tailgate to length and gluing it on here’s the final results: 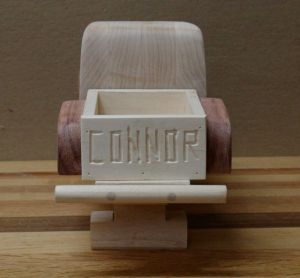 I'm a retired woodshop teacher. I build one of a kind furniture pieces and custom picture frames. You can see some of my sell and carvings through my Etsy store: https://www.etsy.com/shop/WoodworksbyJohn?ref=si_shop Contact me about your project -- always up for the challenge of unique work.
View all posts by woodworksbyjohn →
This entry was posted in Kids Wooden Toy and tagged Connor's Monster Truck, Les Neufeld, Tremendous Toy Trucks. Bookmark the permalink.