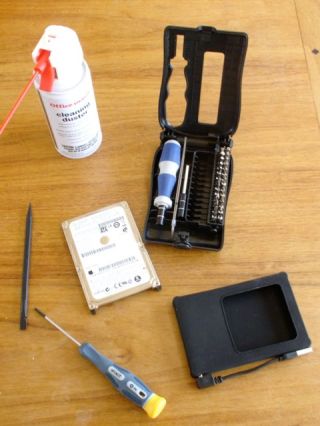 Tools of a Different Trade

That was the question my wife and I asked each other recently and I’d like to share our experience with you.  Have to give you a spoiler alert though, there won’t be any woodworking or painting techniques anywhere in this blog!  If you already follow my work that’s where you can get my thoughts, techniques, and approaches to woodwork.  You already know that my preference lays with hand tool work and for me it’s all about the process not the speed at which I can accomplish things.

I’d guess that if you’re interested in my blog you may be interested in my wife’s work as well.  She’s a very successful artist and I’m lucky enough to be her framer, packing and shipping guy, and #1 Fan!  If you have the time and inclination you can check out her work at these gallery sites:

Okay, back to the computer high tech stuff!  In 2009 we decided that since our old PC had some issues and either crashed or picked up a virus it was time to replace it.  At the urging of our Apple infatuated son, our Christmas presents to each other that year were MacBook Pros.  Her’s is a 15″ while mine is 13″ but in any case; they are getting on in years, especially for electronics.  Things were slow and we got that constant, whirling beach ball of doom!  To replace both of them would have easily approached the $2500.00 threshold and I’m sure you’ve heard of the starving artist syndrome!

Once again, Adam came to the rescue with his solution.  Our MacBooks were outfitted with old style drives which create a lot of heat which equals slowness! He had replaced the drive in his girlfriends computer with solid state unit plus installed a new battery and said it made a huge difference.  Diane did what she does so well and started searching the net for parts and info.  A fantastic site she found was IFIXIT.  Not only did they have everything needed to update our laptops, it was very carefully laid out for each particular model.  Then, there are very clear video’s showing how to complete each step and they offer all of the tools — one stop shopping at its best!

Things went well with one exception, specific tools needed.  After backing up our hard drives to the new, solid state ones it was time to begin.  After unscrewing the back of Diane’s we discovered that this particular model (Mid-2009) used a Pentalobe #6 for the battery which wasn’t included in our deluxe 26 bit screwdriver set.  Definitely give IFIXIT credit for great phone support.  When Diane called them he offered to send that screwdriver out with free postage so that we got it in two days.  Incidentally, my battery was secured with a Y-shaped screw head!  After getting the needed screwdriver we spent a couple of hours yesterday afternoon on our high tech challenge.

What we accomplished was to replace our old drives with solid state units, both batteries have been renewed, and Diane increased her RAM from two, 2KB chips to two, 4KB chips.  My computer originally had two, 1KB chips so those were replaced with the original ones form Diane’s computer.  After the work was completed on Diane’s computer and the back screwed on tight we held our breath as the screen went from dark to grey after hitting the power button.  What a relief to see that Apple trademark appear and watch everything load up.  Seemed like an eternity for that to happen but now it is lightening fast.  Diane and I then went to work on mine, this went quicker since we’re now “pros”!  It too was a success and the difference in our computers operation is amazing.  For about $600.00 we updated and increased the speed of our computers immensely; money and time well spent.  Computer repair/update was an interesting endeavor but I think painting and woodwork will be our mainstay! 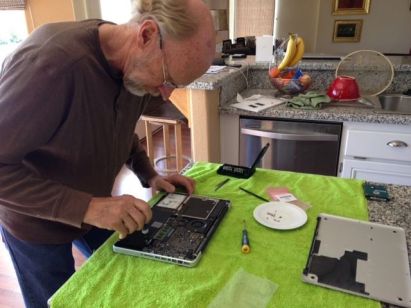 New use for the kitchen island

I'm a retired woodshop teacher. I build one of a kind furniture pieces and custom picture frames. You can see some of my sell and carvings through my Etsy store: https://www.etsy.com/shop/WoodworksbyJohn?ref=si_shop Contact me about your project -- always up for the challenge of unique work.
View all posts by woodworksbyjohn →
This entry was posted in Uncategorized and tagged Apple MacBook Pro, computer update, IFIXIT, replacing MacBook battery, replacing RAM, solid state drive. Bookmark the permalink.