Posted on May 5, 2020 by woodworksbyjohn

An advantage I have when it comes to doing frames for my wife, Diane Eugster is that I get a sneak preview of her work when I go into her studio.  Many times what I see inspires a frame design and that was the case with this painting of hers titled  The Color of Asphalt.

The Color of Asphalt by Diane Eugster 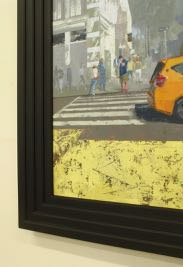 The painting is of a photograph she took on a trip to New York City.  The architecture of the building and then the lines of the crosswalk made me think that the frame for this should feature a linear design, draw the viewer in, and compliment the palette.  The painting is 16″x20″ and the frame is about 3  1/2″ wide.

Resawing pieces for the steps — surfaced to 3/16″

Work started with 1  1/18″ Basswood which I get locally from Peterman Lumber, I really like this material.  After ripping it to width a slight chamfer was cut on the tablesaw.  I wanted the “steps” to be even and found the easiest way to accomplish that was to use metrics.  I know;  as a woodshop teacher who fought the metric phase during the 80’s and 90’s this is shocking!!  However, I must admit now that it’s so much easier and the rip fence on my SawStop shows Imperial and Metric measurements so there was no need to do any conversions.  The first layer only needed a rabbet and the chamfer on the sight edge.  The other pieces were chamfered on all four edges, the plan was to resaw them and rip to the required width to make the steps.

After the frame was assembled (biscuits, glue, overnight clamp) each step was attached one at time.  They were initially cut with a miter saw then I used a shooting board for the final fitting. Lines were drawn to make sure the 23gauge pins would be concealed by the next level.  I don’t feel there’s enough holding power with pins so each step was glued, pinned and then clamped overnight.  I had to use parallel clamps for the last step due to the thickness of the frame, they gave me a little bit of movement.

There are three layers/steps on the frame and I anticipated that glueing them up and keeping the edges perfectly aligned would be a challenge — I was right.  To handle that the first step was to scrap off the glue and then use a Jack Plane to even them.  There was still a visible joint in a few spots that needed to be taken care of so Durhams Rock Hard Water Putty came to the rescue.  I mentioned this on a picture framers group on Facebook and was asked why this product.  If you’ve never used it, it’s my goto for any nail holes or repairs.  Harder than any pre-mixed product plus it will never dry out since you mix up a fresh batch whenever it’s needed.  Nothing more annoying than having to patch something and you open that can or tube of putty only to find it’s hard as a rock!

After all of that work it was time to figure out the finish.  Here’s where all of the work making the frame can be ruined.  Using gold leaf didn’t seem like a good choice for this contemporary painting so the next option is usually black.  It’s my habit to make sample pieces and on one full corner piece I made I tried a semi-gloss black over primed wood.  It was too shiny and the Basswood grain and miters telegraphed through — not acceptable.  Each  layer was sanded after attaching it to the frame and before applying the next layer/step to get them as smooth as possible.  The finish started with 6 coats of hard traditional gesso.  Brushing would have  been a nightmare so flat black spray was my choice.  After doing some sample pieces and liking it the entire frame was done.  Usually I prefer to either wax or use shellac over painted surfaces but for this frame that didn’t look right.  It needs (IMHO) that flat look that is “just like asphalt”!  By the way, Diane decided that would be a good title for her work.