Posted on September 22, 2013 by woodworksbyjohn

My grandson, Connor will turn three this September so as his Opa I really want to make him something special.  This little guy is absolutely crazy about cars and construction machinery so what better present than a monster truck with big tires for him to play with?  The problem I’ve run into though is that right now it’s July and I’m having a ball building this for him but can’t publish the blogs because they would be visible on Facebook and to his mother (my daughter) who subscribes to my blog.  Don’t want to ruin the surprise so I’ll blog the work but keep them as a draft until after his birthday.  It seems that blogging about my work has become such a habit that I find myself writing them as I work, almost as if on automatic pilot!  I hope that those of you that take the time to read them find them worthwhile and enjoy my ramblings.

It’s rare that I build a project directly from plans but I saw a book titled Tremendous Toy Trucks written by Les Neufeld.  The picture on the cover was a definite source of inspiration.  I’m a car guy anyway and it showed a late 40’s, fat fendered, Ford pickup truck complete with some huge tires.  Immediately I could see Connor having a blast with that one.  I purchased the book and although there were some problems with the drawings and dimensions which I feel shouldn’t have gotten to print but that’s the way things go.  Of course, the books plans and methods were modified to fit my methods of work and the tools I have available.  Not to sound like a whiner but building something like this is every bit as complicated as a piece of furniture would be to make.  One thing that concerns me is there is very little joinery so assembly relies on glue lines which are proven to be strong.

Here’s where things are now, let me explain this picture:

Although it seems like a collection of parts there’s an incredible amount of work that’s gone into this project so far.  The wheels were pretty involved so I’ll do a separate post on those.  Let’s start off with the bed you see in the center.  The books method was to make it like a bandsaw box from a rectangle of wood.  Since I wasn’t too keen on that idea I used some 1/2″ Maple for the bottom, 1/4″ for the sides and glued it together using a pinner to help align the pieces.  My goal is to carve CONNOR into the tailgate so it really has the truck look.  It’s pretty small so it’ll be a challenge!  Below the bed and to the left is one of the axles and a pretty massive grille and bumper guard.

The body started life as 4 pieces of Maple laminated into an approximate 3″ square block that’s just under 5″ long.  In the book it’s suggested that you enlarge the pattern but that wasn’t necessary since it seemed easier to lay it out from the measurements given. If you know my work, I’m not a big fan of sanding wood; my preference is to plane smooth and also to use scrapers.  Well, let’s say I’m really glad I purchased an inexpensive 1″ belt sander to use for sharpening a while ago, simplifies working all of the curves required for this project.  Once the body was roughed out it was time to work on the fenders.

It’s suggested to use a contrasting wood for them and I just completed a run of boxes using Macacauba.   Here’s a LINK to one of the steps in that box series.  The first step was to laminate some pieces together to get the 1″ width required for the front fenders.  I changed the procedure by using a forstner bit to create the opening in each fender rather than a series bandsaw cuts followed by a drum sander.  The patterns was attached and the piece cut.

Here again, I deviated from the plan.  The front of the truck has quite an angle to it as you can see in this picture.  I decided to cut the angle on the bandsaw but then before the profile of the fender is cut I used a block plane to get that surface smooth.  Knowing the bandsaw blade would leave a rough finish and not wanting to sand that smooth this seemed like the best option for my woodworking methods.

The way I got the angle for this cut was to hold the cab squarely over the fender blank and  trace it directly to the piece.  Like I mentioned, this is a somewhat complicated project! 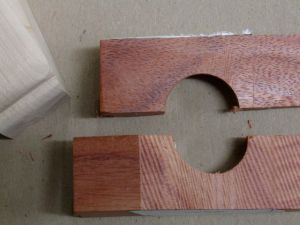 You can see the difference between the top piece which has been planed and the bottom one right off of the bandsaw.  The pieces were then cut out, sanded and formed, and finally glued onto the cab.

So at the end of the day (or maybe two) here’s what I have: 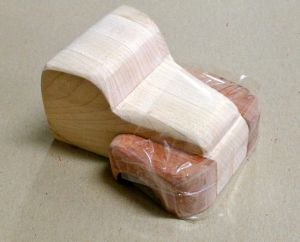 I'm a retired woodshop teacher. I build one of a kind furniture pieces and custom picture frames. You can see some of my currently available work, boxes, carvings through my Etsy store: https://www.etsy.com/shop/WoodworksbyJohn?ref=si_shop Contact me about your project -- always up for the challenge of unique work.
View all posts by woodworksbyjohn →
This entry was posted in Kids Wooden Toy and tagged Connor's Monster Truck, Les Neufeld, Tremendous Toy Trucks. Bookmark the permalink.