Custom Order for the U.K.

Posted on September 17, 2013 by woodworksbyjohn

Allow me to give you the “back story” of this newest project I just received via the Etsy store.  There was a new, upscale shopping center that opened here in Las Vegas in 2011.  It’s called Tivoli Village and is designed to look like a Venetian center, really quite beautiful.  Well, to shorten what could become a very long story there was a shop there that featured unique and handmade eyeglasses called Obika.  Now my preference for reading glasses has always been the kind that have no frame on the top.  This way my vision of the students in class was unobstructed — very important when teaching construction at a boys prison!  Granted, it’s a matter of personal taste but I really loved the ones you see me wearing so dug deep into my pocket to buy them.   They’re hand made in Germany so you can imagine my dismay when they were given to me in a cheap, blown plastic carrying case, proudly labeled as Made in China!  I voiced my displeasure and told them I could certainly do better and they said they’d be interested to see what I could up with — the gauntlet had been thrown down!  Here’s the LINK to the final blog of that project as a sneak preview for you.  The story didn’t have the desired ending though.  When I showed them my initial case they asked to see some additional examples in different woods and although well received by sales and management at the local level,  corporate decided that it wasn’t in the budget at that time.  As with so many businesses they have since gone out of business!  That left me with  a number of cases which were in a gallery and also on my Etsy store.  Sales were okay so at least I felt the investment initially made was worth while.  In any case, my philosophy is that everything is a learning experience and as I’ve voiced before I’m all for anything that keeps me off the couch!

Fast forward to a few weeks ago with an inquiry on Etsy expressing an interest in two of them made of African Paduak.  I only had one in that species but after several emails I now have a custom order for two of them from a client in the U.K.  That’s inspired me to complete the other blanks I had made so now there are a total of seven of these cases in progress.  One of the challenging aspects to this project is creating the recess for the glasses.  The prototype was completely done with a plunge router and you know my preference is for hand tools.

The first step was to prepare the boards.  These are made from a single piece of 8/4 material which is resawn to create the two halves of the case.  The goal is for the case to retain the appearance of a single block of wood.  Holes were then Soss barrel hinges carefully drilled into them.  A template is placed onto the blank and a shallow pass was done to outline the recess.  Next up is to remove the bulk of the waste on the drill press.

I’m using a large forstner bit (30mm) that I’ve modified by grinding off the center spur.  I want the bottom of the box to be as smooth as possible.  To set the depth, use a piece of scrap that is about 1/8″ thick and pass it under the bit.  Once it makes contact with the bit that’s where the depth stop is set.  I also set a fence to maintain the same distance all the way around the box.  For these, it took eleven passes to go around the  perimeter of the box.

As you can see, it

creates a lot of chips, here’s a shot of the completed pieces needed for the seven cases.  They are stacked on top of each other.  There are 3 of African Paduak, 2 of Goncalo Alves,  1 or Zebrawood, and 1 of Spanish Cedar.  Can you imagine the dust and noise there would have been if all this material had been removed with a router?

The next step was securing the piece back into the template.  This picture shows how it looks after the drill press process.  I use a small, Porter Cable plunge router with a cutter from Woodline, these are made in the USA.  It’s always better to take several light passes rather than trying to hog out a lot of material at one time, in this instance I used 5.  Most have equipment for this operation are ear protection, dust mask, and safety goggles.  I gave my wife a chuckle because I was covered in head to toe with the bright red dust from the Paduak! 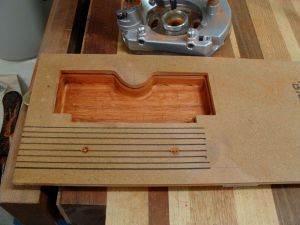 After the initial cuts around the perimeter I use those lines on the side of the template to guide the router and smooth the entire bottom.  It’s not nearly perfect yet but the lines give some type of order to the process.

After all of the noise and dust created by the routing process I’m more than ready to use the grand daddy of routers, the almost antique,  Stanley #71.  It will remove any remaining inconsistencies.  Your best approach for a smooth cut is a sharp blade and then skewing the blade as you take light cuts.  After final smoothing with sandpaper supported by a tadpole sander they will be ready for finishing.  These get several coats of shellac to preserve the woods grain and coloration followed by wax.

I'm a retired woodshop teacher. I build one of a kind furniture pieces and custom picture frames. You can see some of my currently available work, boxes, carvings through my Etsy store: https://www.etsy.com/shop/WoodworksbyJohn?ref=si_shop Contact me about your project -- always up for the challenge of unique work.
View all posts by woodworksbyjohn →
This entry was posted in Craft Fair, Tutorial and tagged Eyeglass case, hollowing out a recess, plunge router, router plane, Stanley #71, Stanley #71 router plane, template routing. Bookmark the permalink.

2 Responses to Custom Order for the U.K.