From the Bar to the Desk!

Posted on February 7, 2014 by woodworksbyjohn

No, that’s not what I did last night — I work with a local interior designer from time to time.  She owns and operates Urban Ranch General Store here in Las Vegas.  Durette has hosted my work in one of her featured artists shows and also has a few of my pieces in her studio.  Well, she called me and asked if I could modify a chair for one of her recent design jobs.  Her client wanted to take one of the bar stools and convert it to a desk height chair instead.  Here’s the original bar stool on the left and the modified desk chair on the right:

The current seat height was 24″ which is too tall for a desk.  The client asked for casters as well.  The limiting factor with this project was the foot rest.  Even though it’s screwed into position (rather than tenoned) moving it wasn’t feasible.  I knew there were many different styles of casters but was somewhat surprised by the pricing.  Seems as if the readily available ones were all 2″ in size and roughly $5.00 a pair.  Then they make a huge jump to $30.00 – $60.00 for a set of 4.  After consulting with my client, we chose the lesser priced ones for this project.  Fairly straight forward job, the only complications was having to deal with the screws which were centered in the leg.  Because of that the stem mount for the casters is off center.  Here’s a photo essay of the process: 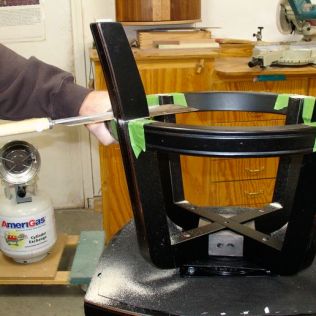 Flush cut saw had too fine of a cut so went to Japanese Razor saw. 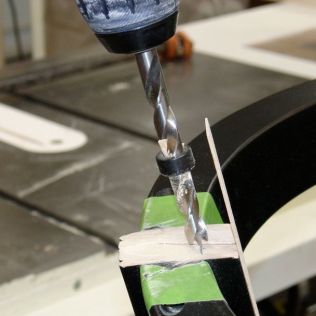 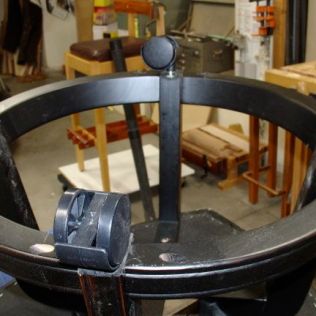 By the way, stools seem to be the current trend.  If you’ve followed my blog for a while you may recall the Dovetail Chair I designed back in 2010.  From the publicity I received after being an awarded an Honorable Mention at the Design in Wood competition I made a set of bar stools for a local client.  He called me a week or so ago, heart broken because he knocked one of them over and split the back!  Even though this commission was 4 years ago I want to see if I can fix it some way.  You can see that stool in the last picture, here’s a LINK to the final blog of that project.

I'm a retired woodshop teacher. I build one of a kind furniture pieces and custom picture frames. You can see some of my currently available work, boxes, carvings through my Etsy store: https://www.etsy.com/shop/WoodworksbyJohn?ref=si_shop Contact me about your project -- always up for the challenge of unique work.
View all posts by woodworksbyjohn →
This entry was posted in Uncategorized. Bookmark the permalink.