Not Quite Easter but here’s my Egg!

Posted on April 3, 2014 by woodworksbyjohn

So, pretty sure you can tell which is mine and which is China’s finest!

A new woodworking group has started that will meet the fourth Saturday of every month at Woodworkers Emporium here in Las Vegas.  It’s the same place where I teach one day seminars on usage and set up of hand planes and also dovetails.  This group, as if you can’t tell by the picture, will deal with wood carving.  I’ve done some relief carving in the past but this is my first attempt at “in the round” work since my Boy Scout days!  I still recall Mr. Hinkle telling us to just cut away everything that doesn’t look like a fish.  We were using bars of soap then.

This group met on the 22nd. of March and there were 12-15 people there so we’re off to a good start.  Some were very experienced and a few, like myself, were rank beginners.  The group is headed by two friends of mine from the Sin City Woodworkers group (Dennis & Randy) and Randy especially urged me to try it out.  Well, he may have to become my mentor whether he wants to or not but I must give him credit for egging me on to come to this meeting.  Some of the guys with more experience showed off their work and we discussed several different styles of carving.  Dennis had brought his sharpening set up to demonstrate that so there was something for everyone.   The two of them had prepared some blocks of Basswood prior to the meeting.  The challenge was to take one of them and turn it into an egg for the next meeting.  NO sandpaper can be used to accomplish it either.  I took two pieces not knowing what I was getting myself into!

Actually, I let them sit on my workbench while working on the TV cabinet as if they’d magically turn into eggs on their own.  After a few days, I called Randy to see if he had a pattern I was interested.  He did so I asked if I could get it from him and secretly hoped he’d give me a few one on one pointers for getting this square chunk of wood to look like an egg.  Thankfully not only did I get a good cup of coffee, he also gave me quite a few pointers.  He has quite an impressive  collection of things he’s carved so he knows what he’s talking about for sure.  Here’s a little montage of how the square block of wood became the egg (more of less) that you see in the top picture.

Starting point was to locate centers 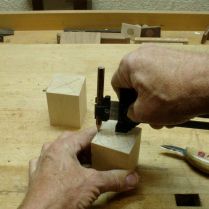 Next, a circle was drawn to begin the carve.

One way to carve is to hold the knife as shown…

Which means you’re cutting towards your thumb and you could get cut! 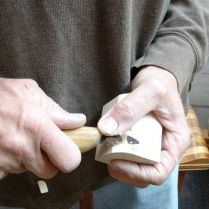 Randy showed a better way to “fulcrum” the knife

Also tried to hold with a bench hook.

Using the knife in the fulcrum method took some getting used to but once I got the hang of it there was more control.  Even though I use my hands all day this used muscles I wasn’t aware I had that were sore the next couple of days.  Using a plastic Easter egg as my model it seemed that the lower, fatter part of the egg takes up about one third so a line was drawn there.  The lower half was completed first.

Not having any hard directions to completing the egg what worked for me was to draw a circle on the end to use as a guide to carve to.  A bench hook was used to hold the egg at first so I could hog off the bulk of the material without too much risk of cutting myself.

Bench hook to “hog out” wood

Circles drawn on end as guide

By using a template from my drafting tools it was easier to draw the circle guide on the end of the egg.  Probably drew 3-4 circles of diminishing diameters and used them as guides to carve down to.  The hard part is knowing when to stop, it’d be real easy to turn this into a Robin’s egg by trying to smooth out all of the facets — remember: NO SANDPAPER!

I have my friend and neighbor, Richard, almost talked into giving the other block of wood a try and joining the carving group.  He painted an unflattering picture of the two of us sitting on the porch in rocking chairs making chips and spitting into the wind! 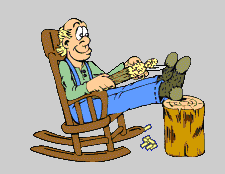 I'm a retired woodshop teacher. I build one of a kind furniture pieces and custom picture frames. You can see some of my currently available work, boxes, carvings through my Etsy store: https://www.etsy.com/shop/WoodworksbyJohn?ref=si_shop Contact me about your project -- always up for the challenge of unique work.
View all posts by woodworksbyjohn →
This entry was posted in Carving. Bookmark the permalink.

1 Response to Not Quite Easter but here’s my Egg!