So Close I Can Almost Taste It!! 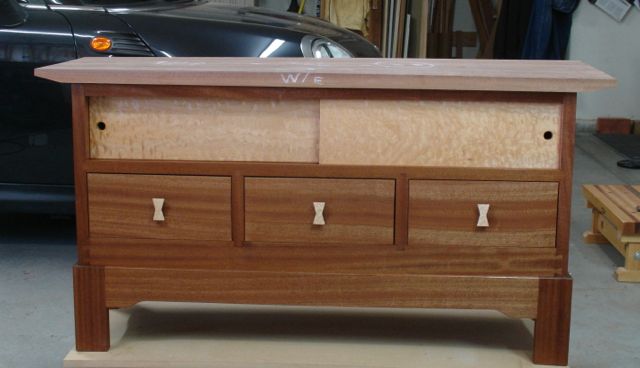 You wouldn’t believe how happy I am to be at this stage.  The top is completely roughed out and now that I see it laying on the rest of the cabinet my vision and sketches have come to life — great!

I knew going into this project that there would be challenges.  Working with these particular boards of Sapele proved to be one of the biggest.  In my opinion, the ribbon grain and coloration are beautiful and the platinum shellac shows it to its best advantage. Planing the interlocked grain and cutting dovetails in it was tough.  The top consists of two boards and there was a considerable amount of winding after they were glued up.  Flattening began with the scrub plane and progressed to jack and jointer. I did some work with the smooth plane just to see what I’d be up against but wanted to get it to the stage you see in the picture before final work was done. 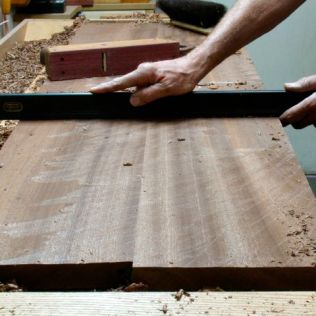 Leveling across the width with Scrub Plane

At times it was easier to pull the Jointer Plane!

A work in progress

Cut to length with trim saw and guide

That’s done so it’s time to taper the ends.  After placing some green tape on it I began to draw in different angles.  My neighbors stopped by to see what I was up to and she really admired the pulls calling them “bow-ties”.  I mentioned that they were supposed to mimic the 14 degree angle of the dovetails so she suggested tapering the ends at that same angle — problem solved; thanks Ann!  Now to figure out how to go about accomplishing that.

Being a hand tool aficionado  my first thought was to hand plance them completely.  After some experimentation on the cut off piece I realized that the grain would fight me every step of the way.  Too large to try beveling or tapering it on the bandsaw so after experimenting on the cut off I came up with this method using a router and a 1/2″ straight bit.  After drawing the bevel on the edge plus the starting and ending point of the taper, successive cuts of about 3/16″ were taken from each end.  To simplify holding the board it was clamped to the tablesaw rip fence.  Now I could get to it from both sides.  After the initial roughing out work with the router I needed to see what I was working to and that’s the purpose of the green tape.  I found that it easier and more controllable to plane across the grain.  Once it was close to the lines, the jack plane finished it off nicely. 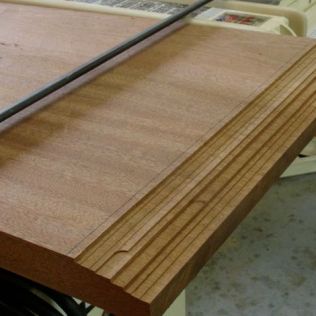 Roughed out steps for 14 degree angle

Beginnings with the block plane

Happy Easter to All of  You — John

I'm a retired woodshop teacher. I build one of a kind furniture pieces and custom picture frames. You can see some of my currently available work, boxes, carvings through my Etsy store: https://www.etsy.com/shop/WoodworksbyJohn?ref=si_shop Contact me about your project -- always up for the challenge of unique work.
View all posts by woodworksbyjohn →
This entry was posted in HDTV Stand and tagged hand planing, jack plane, jointer plane, router, Sapele, Scrub Plane, smooth plane, tapered ends, winding sticks. Bookmark the permalink.

5 Responses to So Close I Can Almost Taste It!!