Glue technology has come a long way from the days where you’d have to keep a glue pot warm in the shop.  That was the first thing you probably did — “put on the glue” so that it was ready for use during the day.  Then came the PVA glues and things became easier, just so the bottle was at room temperature it was ready as soon as you took it off the shelf.  For the majority of cabinet and furniture work PVA glues are great, however; some applications call for a different strategy.  One example is bent laminations, for that I prefer a plastic resorcinol glue that requires mixing but won’t creep like the PVA glue will.

For construction involving dovetails, finger joints, and splines I’ve found that you just can’t beat the properties of liquid hide glue.  Now that it’s available pre-mixed you don’t have to heat and mix it in your glue pot.  There are a couple of products on the market, notably one by Titebond and another called Old Brown Glue.  I’ve used both but really prefer the Old Brown Glue for a couple of reasons.  First and foremost, it’s made in the USA by a man named Patrick Edwards.  That kind of goes with my philosophy of buying local, buying USA, and supporting smaller craftsman such as myself.  It’s probably why prefer to shop on ETSY rather than a large chain store.  I’ve actually written emails with questions about the glue to Patrick and received  a response within a day’s time.

In any case, what prompted me to write this blog and Ode to liquid hide glue is a prototype box design I’m working on plus a fellow woodworking friend of mine ran into some difficulties on a splined, mitered corner box she was making.  This was mentioned on her Facebook and being the retired teacher-dude that I am I saw the need for writing this.  She mentioned what a devil of a time she had assembling that box because the PVA glue has a tendency to swell the wood fibers — this makes bringing the corners together once the glue is applied very difficult to say the least!  Liquid hide glue does not cause the wood fibers to swell.  That’s a huge plus for that application and also doing a finger jointed box.  Maybe you’ve attempted that and the joints that went together nicely during your dry fit needed a mallet and some choice words to go together once the PVA was applied.  Compared to most PVA glues, liquid hide has a much longer open time too.  The only preparation modern hide glue requires is to warm it up prior to use.  I use an insulated coffee cup filled with hot tap water.  The last disadvantage to liquid hide I can think of is a shelf life of about 6 months which can be extended by storing it in the refrigerator.  I generally buy the smallest quantity to avoid waste.

The prototype boxes I’m currently working on for a ceramic arts collective will be made of plywood and probably require staining.  If you’re familiar with my work you’ll know I don’t stain as a general rule but this will be one of those exceptions.  Among the reasons I don’t like staining is the fact that if you get glue on the surface, that part won’t accept the stain.  This was one of the main reasons I wanted to make a prototype.  The boxes in question will probably be made of 1/2″ Maple plywood.  I had some 1/2″ Oak on hand so that’s what I used.  The box was assembled by first securing the sides with packing tape and then adding a band clamp but I made no attempt to wipe off any excess glue squeeze out:

The glue spot is pretty evident on the upper, right hand corner.  Next, I took a white scotch pad, dipped it in clean water and proceeded to scrub away at the glue.  The water was replenished every time the surface got gummy: 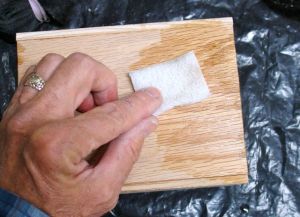 Scrubbing away the glue

Once all of the gummy stuff was gone, a shop towel wiped the surface dry: 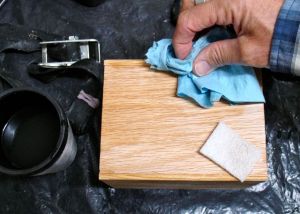 The box was stained with a Minwax Early American stain once it was thoroughly dry.  This was top coated with a wipe on poly the next day and here’s the result.

Stained with one coat of wipe on poly

As you can see, there is no evidence of glue staining where excess glue squeezed out of the joints.  By comparison this picture shows a little section I attempted to repair with CA glue.  The plywood was pretty brittle and a small sliver developed on the corner.  I gave it a squirt of the CA glue to hold it in place and that rejected the stain!

If you’ve never tried Old Brown Glue I’d encourage you to go on line and order a small bottle of it.  The link I gave at the beginning of this blog has all of the usual FAQ’s plus video’s of the product being used.  You just may find it’s the answer to any hassles you may have had gluing up finger joints, dovetails, and splined miters in your work.  When you consider the longer open time and ease of clean up with it there are a lot of advantages over PVA glues.

I'm a retired woodshop teacher. I build one of a kind furniture pieces and custom picture frames. You can see some of my currently available work, boxes, carvings through my Etsy store: https://www.etsy.com/shop/WoodworksbyJohn?ref=si_shop Contact me about your project -- always up for the challenge of unique work.
View all posts by woodworksbyjohn →
This entry was posted in Splined Miter Plywood and tagged dovetail assembly, finger joint assembly, glue clean-up, liquid hide glue, Old Brown Glue, splined miter assembly, Titebond Liquid Hide Glue. Bookmark the permalink.