Since the Wood in Design Show

I’ve talked about being awarded an Honorable Mention for the Sapele and Big Leaf Maple media center at this years Design in Wood show.  Thought I’d share a photo of me getting that award.  Not to be boastful but it’s an awesome feeling having your work  recognized by a jury of your peers.  According to the show catalog there were 17 judges involved.  It would really be interesting to hear from them and learn what criteria they used to determine awards.  Be fun to “be a fly on the wall” during that process.  In a few of the shows Diane entered paintings in the judge would sometimes present the winners and explain how they chose them.  Enough about that, so let me share what else has been going on in the shop since then.

After completing such a large project as the media center was I decided to scale down a bit and make a few boxes.  These are now on my Etsy store so it’ll be interesting to see what kind of interest they may generate.  Etsy sales have been pretty slow this time of year and probably won’t pick up until we get closer to the Christmas season! 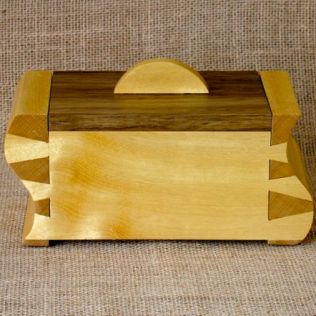 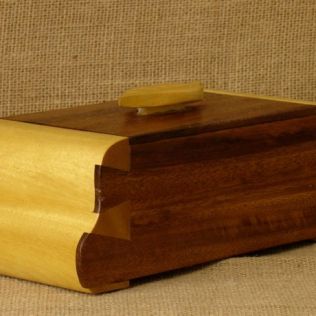 I really enjoy the challenge of this style of box which I refer to as “slanted dovetails”.  As far as I know they’re my original design and I like the play of end and face grain in the joinery.  For the Yin-Yang box, one piece of the Brazilian Satinwood was cut on the bandsaw in the yin-yang design.  They were then flipped around to achieve the design you see.  The Pear Box has the sides contoured in a pear shape and also features a carved, pear leaf for it’s handle.  The Pear Box uses Monkeypod wood for the sides and lid while the Yin-Yang box has a contrasting lid of Black Limba.

One of many things that intrigue me is seeing wood that is carved to resemble cloth or clothing.  In the WoodItIs studio/school, Jamie has a full size tank top that is hanging on a hanger.  I look at it every time I’m at her place and decided this could be something to try.  It’s not quite finished yet but I’ll share what I have accomplished so far.  I took a piece of white cotton (t-shirt material) and soaked it in a solution of water and white glue that was old and questionable for woodwork.  A dowel was clamped to a parallel clamp and the cloth was “artistically” draped over it and allowed to dry.  It remained stiff as a board which is what I was after.

My next step was to take a piece of Basswood (approximately 3/4″ x 6″ x 7″) and first drill a hole through the top for the dowel.  What followed was lots of trial and error with different gouges and carving knives to attempt to make that piece of wood look like a piece of material!  The picture at the left shows it as it is now — almost complete.  The backside is done as well and to be honest, I’m quite pleased with the results!  My intention is to experiment with some white Milk Paint so it’ll be white but have an opaque finish on it.  Experimenting with the hanger design and using some stranded, copper ground wire.  It’s a bit too flexible so my thought is to use solder and a torch to solidify and make it look interesting.  We’ll see but it’s been a good way to spend numerous hours.  In the painting world, this is referred to as Trompe-l’oeil, which means deceive the eye.  I’ve seen some exquisite paintings in this style.  So, what I’m attempting to do with the carving is make the viewer think this is actually a piece of cloth when it’s really a chunk of wood!

I'm a retired woodshop teacher. I build one of a kind furniture pieces and custom picture frames. You can see some of my currently available work, boxes, carvings through my Etsy store: https://www.etsy.com/shop/WoodworksbyJohn?ref=si_shop Contact me about your project -- always up for the challenge of unique work.
View all posts by woodworksbyjohn →
This entry was posted in Carving, HDTV Stand, Slanted Dovetail Box and tagged Black Limba, Brazilian Satinwood, carving cloth, Design in Wood 2014, Etsy, Monkeypod Wood, Yin-Yang. Bookmark the permalink.