Time Flew — PackRat in my Future!

Packrat — what the heck’s a Packrat you say; well check it out HERE.  Hard to believe that almost a month has gone by since the last post I wrote but oh boy, what a month it’s been! Diane and I left Scottsdale on the 4th. of July before the sun was up to beat the 110+ degree heat.  We figured correctly that this would be the best time to beat the holiday traffic.  Once we got home the packing process began.  We had decided that since we were buying a home in Phoenix there wasn’t any sense in renting a trailer just to bring it to Las Vegas, unload and then re-load it to make the move.  Instead, we rented a storage space and filled that up with about half a dozen pickup truck loads.

It’s amazing how much “stuff” you accumulate in 20 years!  We were absolutely brutal in deciding what to keep, what to donate, what to sell, and what to take to the dumps!  So far, the dumps has seen us 5 times!  All of the solvents, stains, flammable stuff, etc. were taken to the Sin City Woodworkers meeting and up for grabs to the members.  I’ve been active in that group since it’s beginning 7 years ago and gave my last demonstration that night.

I won’t bore you with all of the details but this moving process has been quite trying.  So much paperwork, signatures, requirements and timelines to meet but now it seems as if the finish line is in sight.  At our selling end, all the requirements have been met such as the inspection, appraisal, and loan process.  As for the buying end, all we’re waiting on is the appraisal and that shouldn’t be any problem.  Here are a couple of highlights from the garage sale:

Sold all clamps to this man 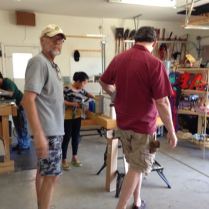 On the curb, gone in 2 days

Diane and I had quite a collection of art and woodworking books which are heavy to move.  After brutally going through and only keeping our favorites we ended up with three good sized boxes of them at the sale.  Honestly didn’t feel that there was much market for them but bundled them all for a fair price to an on-line, ebay book seller — nice!  The weekend we chose had the disadvantage of being one of the hottest with temps 110-114!  At our neighbor advice we also bought bottled water and added to our profits selling them at $1.00 each.  Unbeknownst to us, our neighbors a couple of doors down and across the street had also planned a garage sale so there was lots of traffic.  Saturday was the busiest and after closing the doors around 1:00 pm we rested then celebrated with dinner and a movie!  Sunday was a bit slower, well honestly a lot slower!

Anything that didn’t sell was donated so that someone else can benefit from our things.  Really, the attitude you need going into donating and selling your “stuff” is that you’ve bought it and gotten your pleasure and use from it so now let someone else enjoy it.  Anything not used during the last year was pretty much “outtathere!”; had to be brutal.  The next big step is the packing.  The garage/shop alone took me a couple of days.  Again, being brutal I needed to decide whether or not that jig I made 3 years ago and haven’t used since warranted the space and weight to take with — most things lost out and ended up going to the dumps or another woodworker.  Same for the household items, Diane did a phenomenal job weeding out those items we really didn’t need any longer or use very often.  We both feel that part of the adventure of making the move is adding new “stuff” as we find a need for it.

For example, I had a couple of albums of faded, out of focus pictures from my Vietnam days in the Marine Corps.  Kept a few like this one when I made E-5 but other than that there was no real value in keeping all of them.  Same with high school pictures that were of poor quality to begin with and now faded and brittle.  Did keep my senior yearbook because I’ve kept in touch with some of my friends via Facebook.  My daughter was the recipient of selected pictures of her parents when we were younger, she got a kick out of those and so did the grandsons!

As for moving and packing, best advice I can give is to get boxes that are similar in size, sturdy, have lids, and are free.  Best place we found for that was Total Wine, those boxes are designed to hold some heavy stuff and the way they open them allows us to close and tape securely.  We also subscribe to a meal service called Blue Apron and their boxes are super strong.  Adam and Kim use them as well so have been saving the boxes for us which is a great help.  At this point, Diane’s once art oriented studio looks more like a warehouse as does the shop and storage shed. 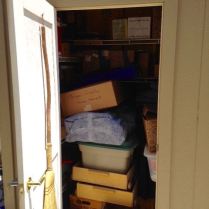 After finding them free on Craigslist we probably have enough picture sized boxes to take Diane’s paintings down and pack away.  For me, that’s like the final nail in the coffin;  those blank walls give this process a sense of finality and although we’re both looking forward to this new adventure, twenty years in one house is a long time.  Wrapping and packing up the furniture I’ve made to fill this house will be the last step in Las Vegas but unpacking them will be our first step in Phoenix.

I'm a retired woodshop teacher. I build one of a kind furniture pieces and custom picture frames. You can see some of my sell and carvings through my Etsy store: https://www.etsy.com/shop/WoodworksbyJohn?ref=si_shop Contact me about your project -- always up for the challenge of unique work.
View all posts by woodworksbyjohn →
This entry was posted in Uncategorized and tagged brutal moving decision, buying house, garage sale, moving, packing, PackRat, selling house. Bookmark the permalink.