First Hand-cut Dovetails in Over a Year!

Posted on February 16, 2017 by woodworksbyjohn

Hard to believe isn’t it?  It sure was for me when I calculated the time.  The last big dovetailed project was my Armoire, then Diane and I did our 6 month Scottsdale adventure where my focus was carving and gilding of picture frames.  Then came selling the Las Vegas house, moving to Phoenix, and then setting up the shop plus all of the other projects associated with re-locating.  All that being said, I decided it was time to see if my muscle memory was better than my brain memory!

I found a piece of big box lumber that the former owner of our house left, it was proudly labeled to be Premium Pine.  Then, I had some Mahogany so decided to make up a box of some kind or another.  If you’re familiar with my boxes, I enjoy playing around with dovetails and angles.  They seem to do pretty well on my Etsy store so it makes my passion and experimentation almost “self-funded”.

Since there are a number of ways to cut dovetails I’ll give a brief tutorial in my tails first approach.  The box design has the edges of the end pieces cut at 15 degrees.  The Mahogany is roughly 7/8″ thick and the Pine sides are 3″ wide and 1/2″ thick.  It’ll be easier to explain if I show this picture of it assembled first.  I always like the play of angles on this exposed joinery, part of the tail is a standard 1:6 angle but the other side is 110 degrees.  Once I figured out the angles the shoulder lines were scribed in and I was ready to go.  I’ve seen a couple of articles or references to “shouldered dovetail” in Fine Woodworking magazine.  This is nothing more than the old Stanley 140 trick that has been used by furniture makers forever!  Kind of annoying to me that someone is trying to say it’s their idea.  For background info, Stanley made a set of skewed rabbet block planes — the 140.  They were perfect for cutting a rabbet on the inner side of drawer pieces to hide any imperfections of the joint and also to aid the layout process.  Matter of fact, Lie-Nielsen makes a pair of skewed rabbet block planes for this very purpose.  At $225.00 a piece it’s a bit rich for my pocketbook but I’ve been using the tablesaw to perform this step for years, a shoulder plane or in my case, rabbet block plane will true up the shoulder. 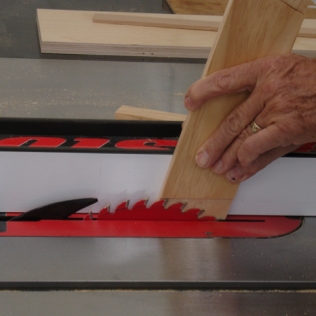 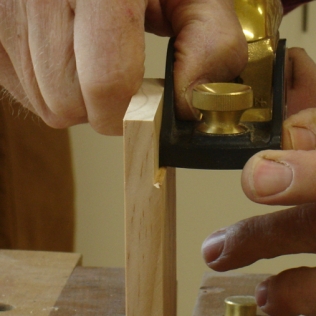 Trued up with Rabbet Block Plane 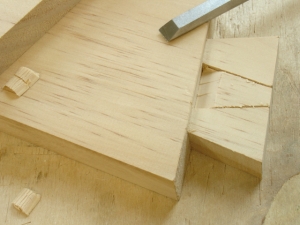 Once the shoulders were true it was time to lay things out.  After scribing the shoulder line and cut the tail, the next step is to remove a small chip which minimizes the tendency of the bevel on the chisel moving that shoulder line back.  After the chip is removed it’s a matter of chopping that chip deeper from both sides.  In my experience this gives a better shoulder line then trying to remove the entire waste from the end of the tail.  Sometimes when you do that, the grain in the waste piece will tear the shoulder.  This is especially true when the dovetail is long and angled like this one is, I’m sure you notice the large chip that’s been removed here.

Next step is to transfer to the pin board.  Here’s where the shoulder created on the tablesaw is really handy as it will lock onto the pin board.  Marked with a knife then cut using the same method as cutting the tails, removing that chip shaped piece, the rest will take care of itself. 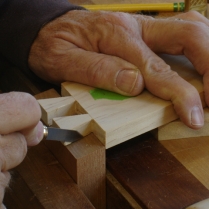 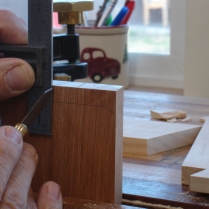 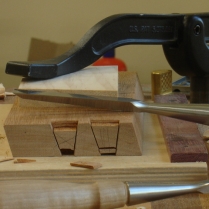 Cleaning out the Waste

Things were progressing along nicely, my muscle memory seemed to be holding up fine and I was really trying to concentrate on the job at hand.  Well, if you can imagine the angles and trying to keep it all straight as to which is up or down, left or right, and then factor in my self imposed stress it was a prime time for an error!  Well, in keeping with the HillBillyDaiku blog written by Greg Merritt I too will confess my mistake!  On the last set of dovetails I somehow got the piece upside down so that one set of tails was on the top while the other was on the bottom.  Only fix was to shorten the sides by 1/2″ and recut both ends of the board — very carefully laid out, checked, and double checked!

Maybe since it’s been a while I managed to make one other mishap!  The first bottom for the box was undersized (simple math error on my part); not a big deal.  Just made a new one but when I was doing the glue up grabbed the wrong piece.  Learned that Old Brown Glue grabs pretty fast when the joint is tight but was able to separate the pieces by carefully prying apart with a screwdriver.  As I used to tell my students; sometimes the only difference between a good woodworker and a mediocre one is the good one has learned how to correct or hide mistakes!  One last picture to leave you with is the effect of a smooth plane on wood.  Whenever possible I avoid using sandpaper in favor of leaving a clean, crisp, hand-planed surface! 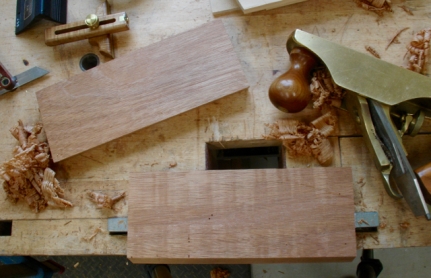 2 Responses to First Hand-cut Dovetails in Over a Year!